Plus: RGB vs RGBW vs RGBA vs RGBWW, Visible Light Spectrum vs Pigment Colors 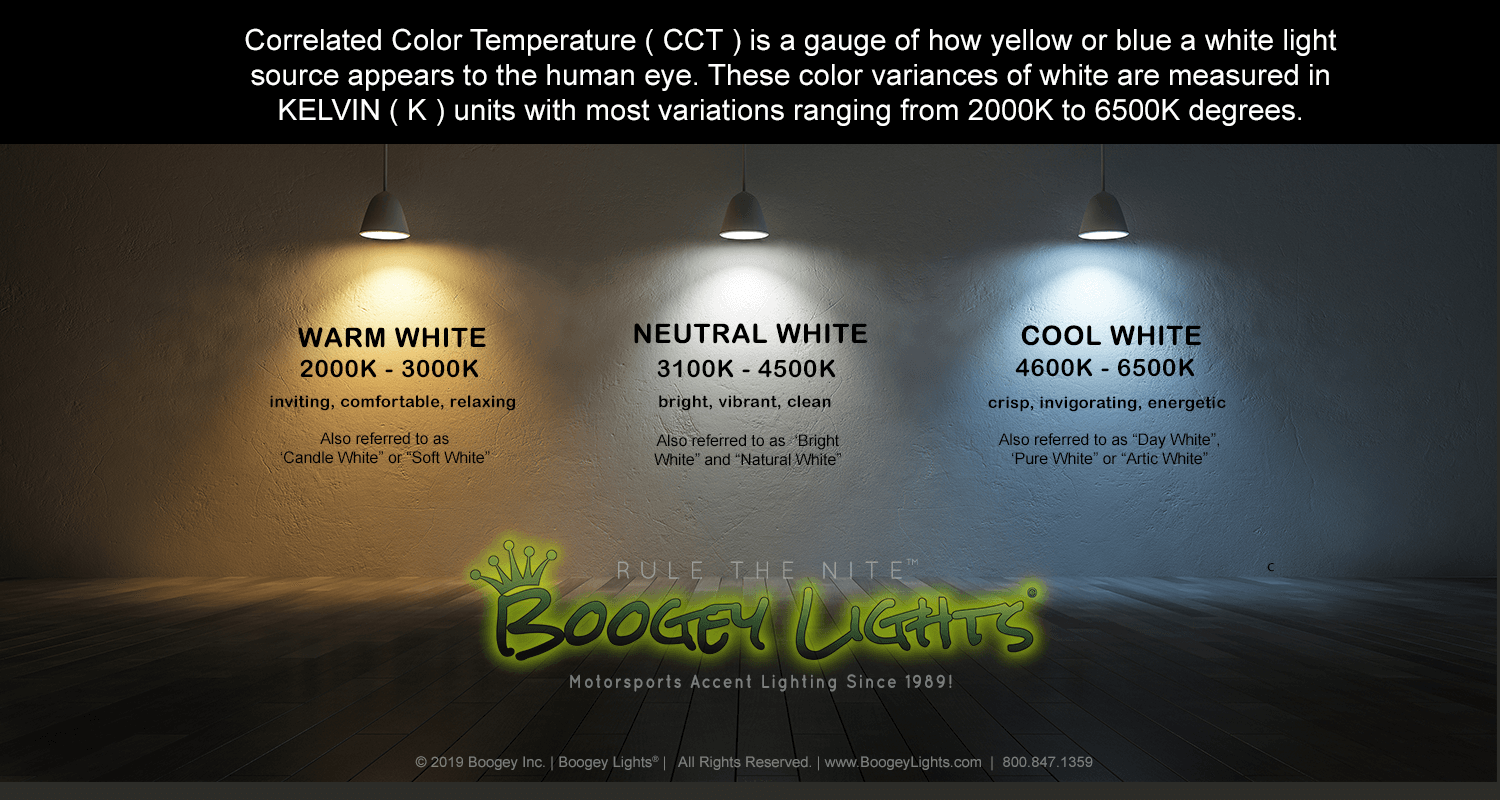 All Boogey Lights® lighting solutions use 5050 LED Chips. 5050 LED chips are named after the dimensions of each chip: 5.0mm x 5.0mm. The most common 5050 LED chips contain 3 diodes although some can have as many as 5 diodes. Lumens ratings for 5050 LEDs are typically in the 15-22 range depending upon the configuration. 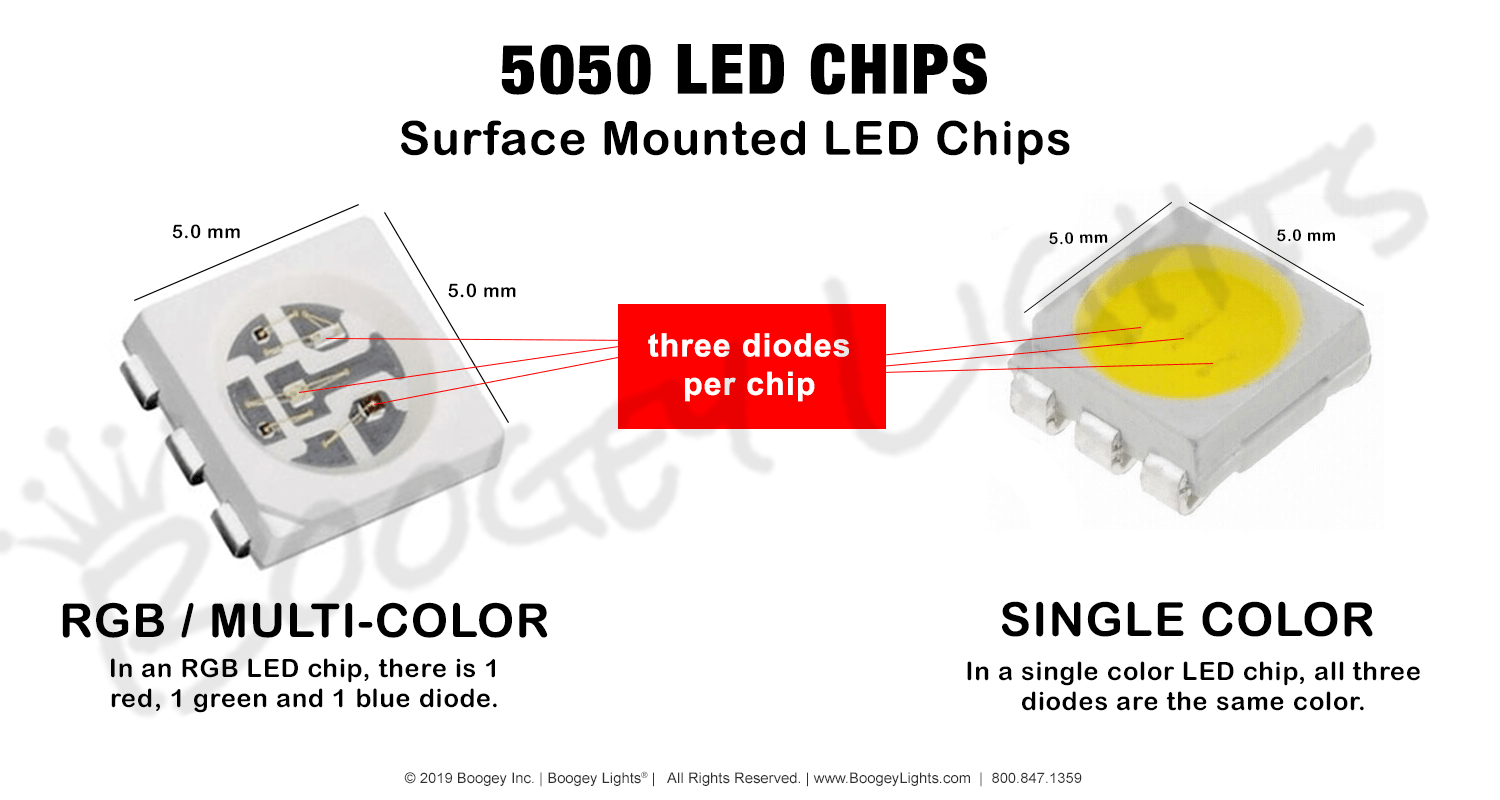 A single-color 5050 LED includes 3 diodes of the same color which makes it incredibly bright for that one color. While white single color 5050 LEDs can be produced in any Kelvin temperature range, they're most commonly made in the cool white or pure white spectrum since white light in this spectrum is best where bright illumination is needed. Single-color 5050 LEDs can be connected directly to a 12vdc power source without a controller although a controller may be used to provided additional functionality such as on/off, dimming and other pre-set functions. 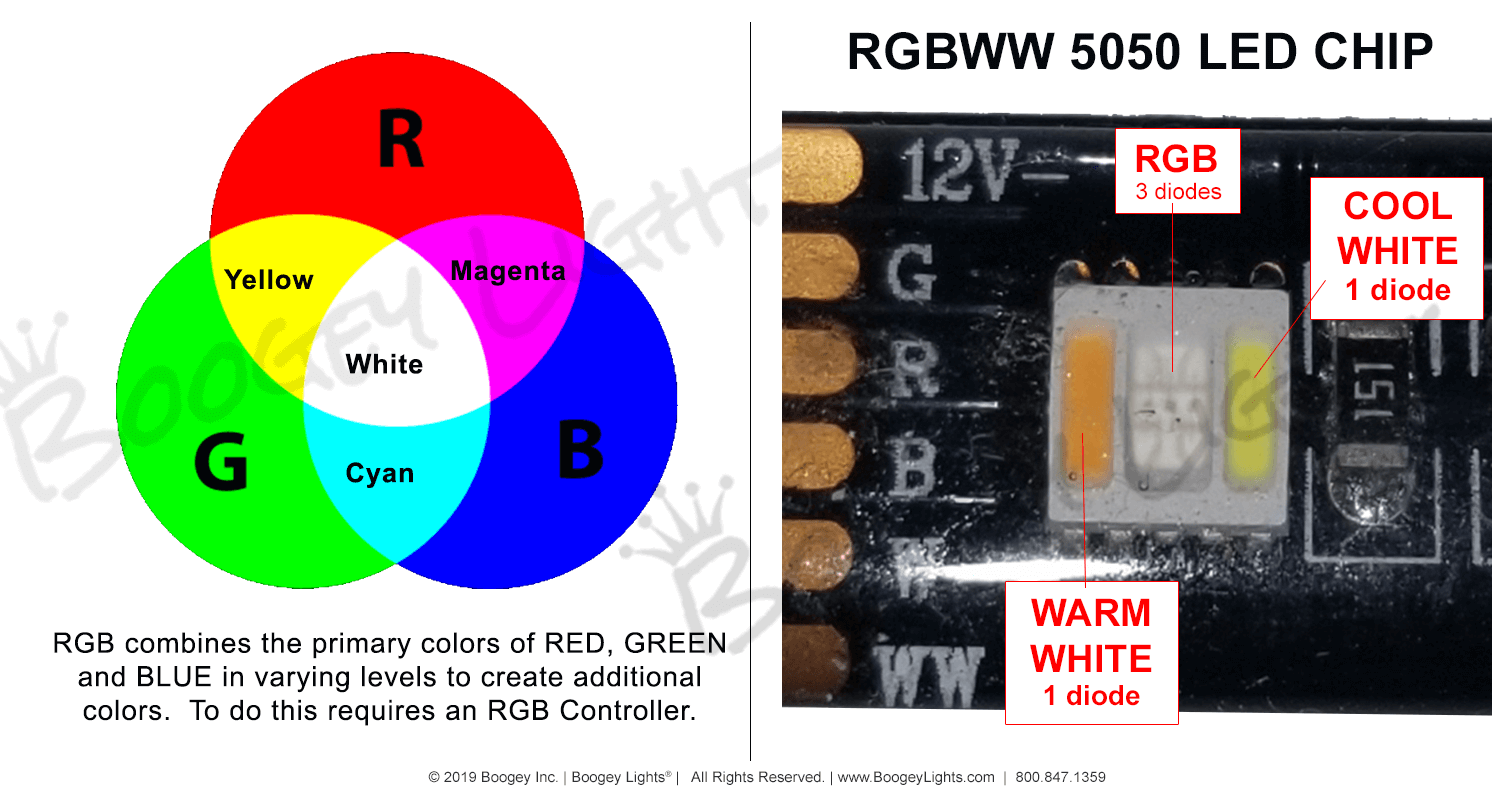 A multi-colored RGB 5050 LED chip includes 1 red, 1 blue, and 1 green diode (thus where the term 'RGB' comes from). It's the mixing of these three different color diodes that produce up to 16 million different color combinations. Multi-color RGB 5050 LEDs require the use of an RGB controller. This controller mixes the red, green and blue colors to create other colors. For example, to create the color yellow, the controller mixes equal parts of red and green (blue is off). To produce the color white using an RGB 5050 LED, the controller mixes equal parts of red, green and blue. The color temperature of white created by RGB 5050 LEDs is in the cool white or pure white spectrum with Kelvin temperatures typically in the 5500K-6500K range.

On the RGBW led strip, in addition to RGB, you get one extra diode which is Warm White. That warm white diode has a Kelvin temperature of 2400 which means it has a yellowish look giving it a warmer, softer, candle like look (see photo below). That fourth diode on the RGBW led strip is often wired to an existing OEM switch allowing you to turn on just the warm white diode with the flip of a switch. Other options include adding a dimmer switch or even another LED controller just to operate that fourth warm white diode.

On the RGBA led strip, in addition to RGB, you get one extra diode which is AMBER. That fourth diode on the RGBA led strip is often wired to an existing OEM switch allowing you to turn on just the AMBER diode with the flip of a switch. Other options include adding a dimmer switch or even another LED controller just to operate that fourth warm white diode.

There is a third type of 5050 LED chip and that is the RGBWW 5050 LED. RGBWW 5050 LEDs combine the best of single color and multi-color RGB LEDs into one 5050 LED chip. An RGBWW LED chip contain 5 diodes: 1 red, 1 green, 1 blue, 1 warm white, 1 cool white.  Because of the two extra diodes, the PCB for RGBWW LEDs is wider (12mm) than RGB LEDs (10mm).  RGBWW 5050 LEDs also require the use of an RGBWW controller to create and mix different colors. The great thing about an RGBWW LED chip is that not only will it produce all of the same colors as an RGB LED chip, it will also produce the color white on both ends of the Kelvin spectrum. With RGBWW, you can for example create a WARM WHITE (2000K - 3000K) and a COOL WHITE (4600K - 6500K). Better still, by mixing equal parts of the Warm White and Cool White, you can also create a Neutral or Natural White color. But it gets even better; by mixing the warm white and cool white diodes with the RGB diodes it's possible to create additional variations of RGB light combinations. For example, mixing equal parts of red, green and blue of the RGB LED and then adding the warm white diode and cool white diode produces an incredibly bright white light not possible with any other 5050 LED chip.

The colors human beings can see with their eyes are different when looking at light emitted by a light source such as LEDs (visible light) vs those on a printed page (pigment colors). Some objects are luminous and give off their own light (e.g. LEDs, computer screens, TVs); all other objects can only be seen if they reflect light back into your eyes (e.g. ink or paint). This is why there are two color models:

RGB Additive Light. RGB Visible Light is commonly referred to as ADDITIVE primary colors. Red, Green, and Blue are the primary colors of light. They can be combined in different proportions to make other colors. For example, red light and green light added together are seen as yellow light. This additive color system is used by light sources, such as televisions and computer monitors, to create a wide range of colors. When different proportions of red, green, and blue light enter your eye, your brain is able to interpret the combinations as different colors. Note that when RGB's primaries are mixed evenly they create the secondary colors of the other color model, CMY(K). When equal parts RED + GREEN + BLUE are added together they create the color WHITE. The absence of light is true BLACK. The colors in RGB appear slightly more brilliant than in CMYK. This can be attributed to the difference between the mode of transmitting light versus absorbing and reflecting light off of surfaces. 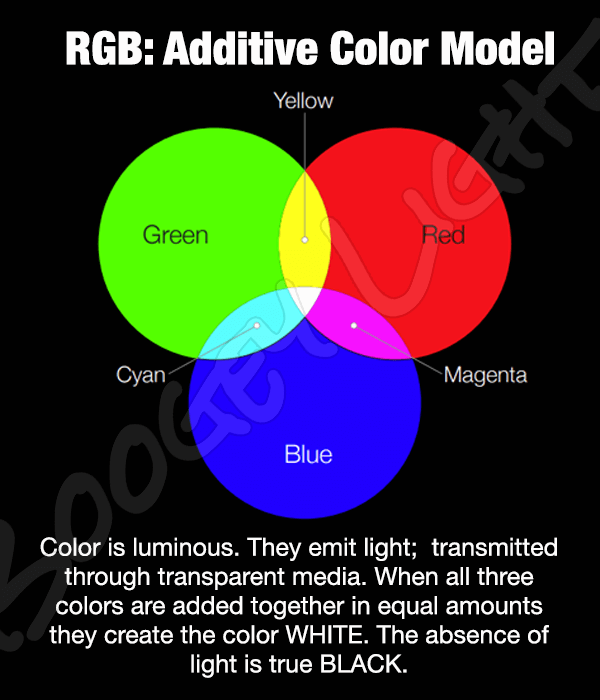 CMYK Subtractive Light. The primary colors of pigment (also known as subtractive primaries) are used when producing colors from reflected light; for example, when mixing paint or using a color printer. The primary colors of pigment are magenta, yellow, and cyan (commonly simplified as red, yellow, and blue). Pigments are chemicals that absorb selective wavelengths—they prevent certain wavelengths of light from being transmitted or reflected. Because paints contain pigments, when white light (which is composed of red, green, and blue visible light) shines on colored paint, only some of the wavelengths of light are reflected back. For example, cyan paint absorbs red light but reflects blue and green light; yellow paint absorbs blue light but reflects red and green light. If cyan paint is mixed with yellow paint, you see green paint because both red and blue light are absorbed and only green light is reflected. 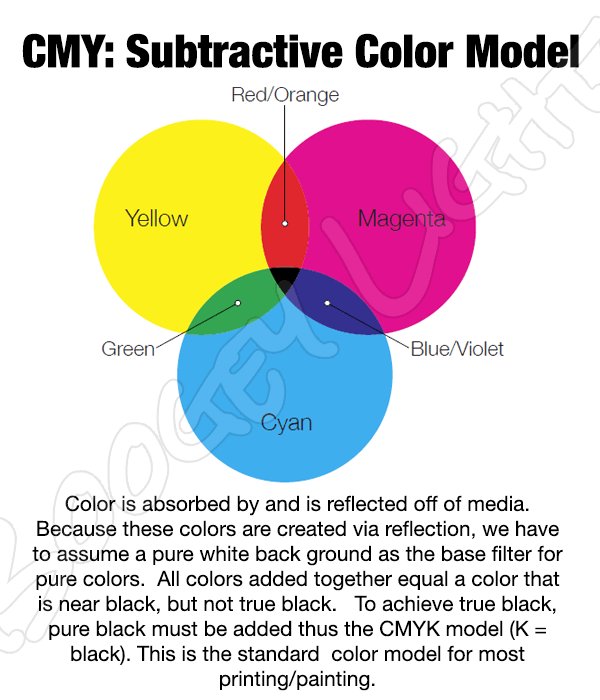 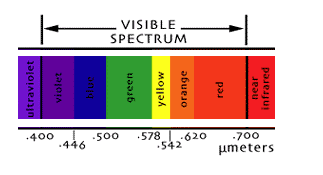 RGB leds have three color DIODES: RED, GREEN and BLUE. It's the mixing of these three colors together that create other colors.

With an RGB LED, there is only one RED diode so it can only be used once.

What's the solution?   Well, to get something that looks more like orange to the human eye using RGB LEDs you need to mix equal amounts of RED + GREEN (actually just a bit less green since the human eye is more sensitive to green wavelengths). This will give you the color YELLOW. Then, increase the intensity of the RED just a little (or, pull back the green). This will essentially add a little red to the yellow to effectively mix a color that has an orange tint. It's not perfect but it's as close as you can get to the color orange using RGB led lights.

If your application absolutely requires the color ORANGE, you can order just ORANGE (or AMBER) LED strips.  They're single color of course so you can't adjust the colors.  The other option is to use our RGBA (RGB + Amber) LED strips.  If you mix 100% RED + 100% AMBER, you'll get a very pleasant orange color.