Family owned since 1989, BOOGEY LIGHTS® is a leading manufacturer of super‐bright hi‐intensity LED accent lighting specifically designed for motor vehicle applications. While the company's heritage is in the motorcycle industry, starting in 2014 the product line was significantly expanded to support large format vehicles including RVs, trailers, semi‐trucks, golf carts, tow trucks, food trucks, boats and more. Boogey Lights® is the only LED accent lighting company that designs, assembles and supports its LED products in the United States. Boogey Lights® LED products are offered through a dealer network as well as online direct to consumer. Boogey Lights® LED light kits are available for both DIY and professional installation.

Since 1989 Boogey Lights® has been lighting motorcycles - Harley Davidson®, GoldWing®, Yamaha®, Suzuki®, Kawasaki® and many others including cruisers and custom choppers. In fact, Boogey Lights® was the first company to use neon light tubes to light bikes. At that time our custom neon tubes were revolutionary as a motorcycle accessory. In the early days we traveled around the country attending motorcycle rallies installing our neon lights made specifically for our unique application. At first the focus was on Gold Wing motorcycles because the neon glass tubes could be easily attached to the Gold Wing fairing and hidden underneath the plastic casings. The lights too were protected by the plastic casing surrounding the engine of the Gold Wing. Eventually over time we were able to shrink the neon tubes which made it possible to fit them into tighter spaces for use on VTwins but still, neon tubes were fragile. It didn't take much force or flexing to break them even when encased in clear plastic tubes. The other problem with neon lights was the relatively large power consumption requirements. It was possible to drain the battery if you left your lights on for too long. Even so, the demand for lighting bikes using our unique neon tube technology continued to grow through the 90's and into the early 2000's.

While Light Emitting Diodes (LEDs) were invented in the early 60's, the size and cost to manufacture were prohibitive for most commercial applications. However, with the rapid advancement in technology in the 90's and early 2000's, things began to change. The manufacturing process for LEDs significantly improved which for the first time made it possible (and affordable) for small LED lights to be placed on the bottom of gas tanks to light the chrome of big VTwin engines. Now, it was possible to light VTwin engines and do so in a way that looked good without having to use bulky, fragile neon glass tubes. The other advantage to LEDs was the relatively low power consumption. You could leave your lights on for hours with the bike parked without having to worry about the battery dying. The early LEDs were assembled in waterproof PODs or sticks consisting of 3 or 5 LEDs. As the technology improved, LEDs began to be integrated into low-profile strips consisting of 12, 21 or even 39 LEDs. When it became clear LED technology had many advantages over neon, we made the switch from neon tubes to LEDs. It took a few years to phase out all of our neon tube products but eventually by 2006 all of our lighting products were based on LEDs.

In 2002 we launched our first website. Like so many other businesses, the internet was a game changer. It made it possible for customers to view our product line, rally schedules and obtain technical support. While the internet is used by just about everyone today, it wasn't that way in the first half of the 2000's. So we continued to attend rallies around the country installing our lights and working with a growing network of dealers who were also selling and installing our lights. During this time LED technology significantly improved in terms of cost, size and brightness. Also the options for remote control units multiplied. Initially we offered simple on/off remote controls. Now however you can purchase a wireless remote control with all sorts of fancy options. We even offer a controller that can be operated by your iOS® or Android® smartphone. Times certainly have changed since the early days!

Today, Boogey Lights® offers a full line of do-it-yourself and professionally installed LED lighting kits for all kinds of motorsports applications: motorcycles, RVs, boats, trailers, pickup trucks, cars, semi-trucks, tow trucks, ATVs, food trucks and golf carts. Our flexible LED strips and LED pods are hidden from view and wired directly to your battery using our own fuse and switch. They will in no way interfere with your vehicles electrical system and draw minimal power (milliamps) so they can be left on for hours while the bike is parked and not run down your battery. If you prefer to have a professional install our lights, we have a number of independent dealers and professional installers who attend some of the biggest rallies and shows in the country.  And of course, there are Boogey Lights® dealers around the country who install our products in their shop year round. Even with the increased competition, we've remained the accent lighting market leader by offering the best and brightest LED lighting products backed by our no-hassle original owner LED lifetime warranty and outstanding customer service. Our customers love us because our products are awesome and so is our customer service. They’ll also tell you our lifetime original owner LED warranty is for real! 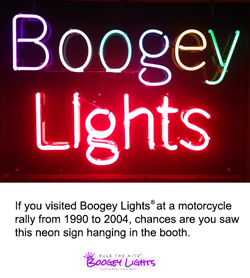 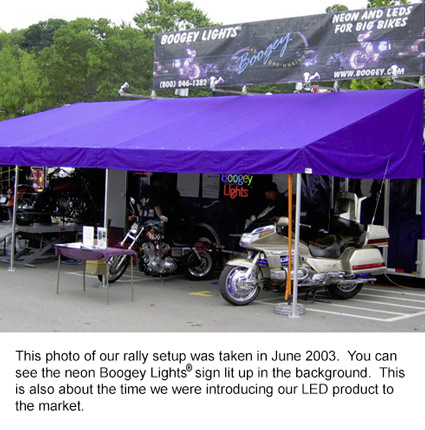 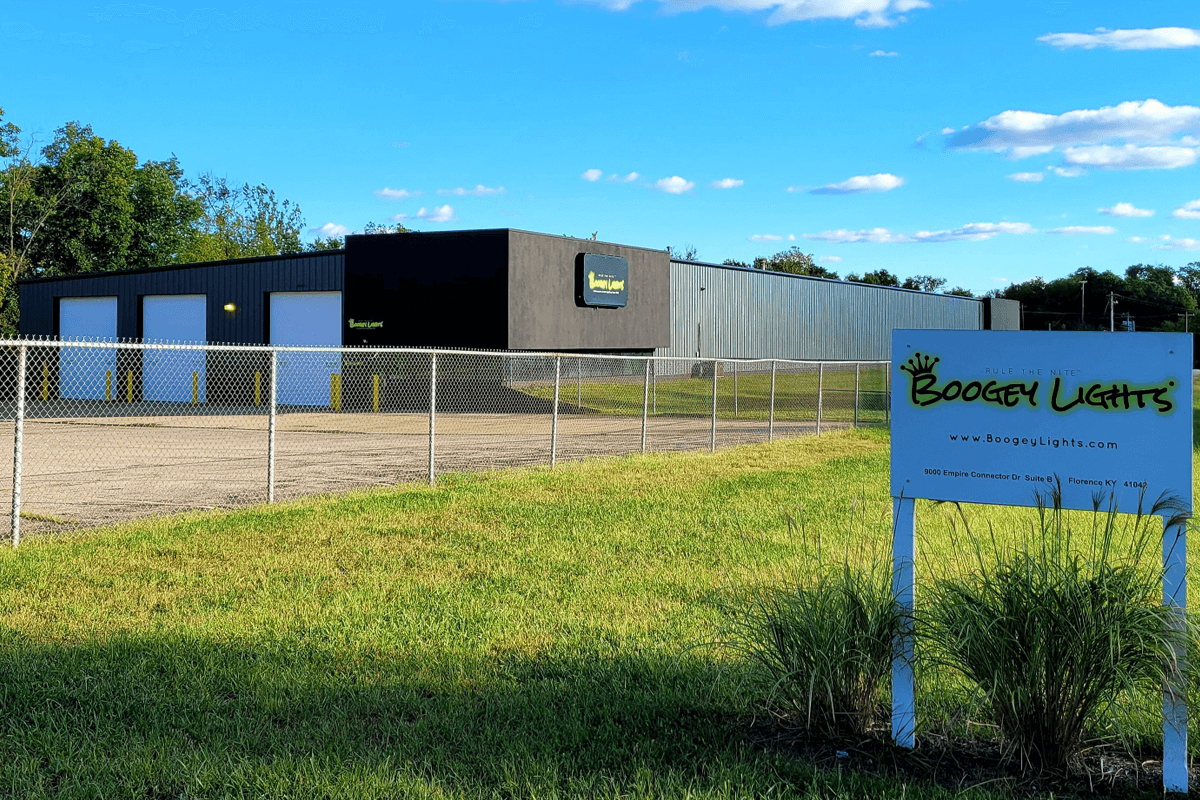 On May 1, 2014 Boogey Lights® (Boogey Inc.) was acquired by Online Ventures LLC. Shortly thereafter the Boogey Lights® distribution center was moved from Knoxville TN to Florence KY which is in the Cincinnati Ohio Metro area. Online Ventures is an entrepreneurial marketing organization that specializes in finding unusual or niche product lines and then building an infrastructure to support them.  We take off-the-shelf technology and couple that technology with the incredible marketing reach of the internet. Since acquiring the enterprise in 2014 Boogey Lights® has significantly expanded it's product offering to include LED lighting for all motorsports applications such as RVs, golf carts, ATVs, boats, semi-trucks, tow-trucks, food trucks and even some home accent lighting applications (e.g. patios, pools, gazebos, bar lighting, cabinets, etc.). We've also significantly expanded our line of LED controllers; several of which will handle 3,000+ LEDs for large profile vehicles. We've added Bluetooth wireless and long range extended antenna capabilities too to our LED controller features.

On March 9, 2020 we moved to a larger headquarters facility located in Florence, KY. Our new, larger facility gives us the ability to meet the growing demand for Boogey Lights® products. Our facility includes a product showroom along with additional space for product assembly and fulfillment. In addition, our new facility includes an installation bay which allows us to offer installation services for all of our LED light products. Our installation bay can accommodate rigs as long as 80' and 14' high. We have a much larger parking area too to make it easy for large rigs. Our facility has easy access for large rigs and is located about one mile east of I75 in Florence KY (and the famous Florence Y'All water tower).

Of course our commitment to being the best motor sports LED accent lighting company remains as strong as ever with a renewed emphasis on providing a superior quality product that is designed, assembled and supported right here in the USA. We continue to offer best-in-class customer service and a kick-ass warranty. Yeah, we know lots of companies say this but really, no other manufacturer comes close. Don't believe us? Check out some of these Boogey Lights® reviews customers have shared.