In this section you'll find answers to some of the most commonly asked questions we receive for our RV, Motor home, Camper and Trailer LED Lighting products. Also, some customers find it helpful to review the installation instructions of our RV products before making their purchase decision. For that reason ALL of our product installation manuals are online in PDF format. They can be downloaded by visiting our INSTALLATION RESOURCES page. We also offer some HOW-TO-VIDEOS.  If you're looking for answers to common problems, check out our TROUBLE SHOOTING guide. Ultimately though if you don't find your answer here, give us a call or send us an email and we'll do our best to answer your question. If you have a specific lighting request, use our LIGHTING REQUEST FORM to submit your request. If you're unsure as to whether or not you want to do the installation yourself, Boogey Lights offers INSTALLATION SERVICES at our Florence, KY location. So too do many of our dealers.

I see you recommend wiring your awning and under-glow lights directly to the battery. If I wanted to tie into another circuit that is closer to my awning, can I do this?

While we suggest connecting Boogey Lights® products directly to a 12vdc power source (e.g. house batteries) there are a couple of reasons why you may prefer to tie into existing 12vdc circuitry. First, is convenience. It may be more convenient to tie into an existing 12vdc circuit rather than running power back to the house batteries. Often an existing 12vdc circuit is close by whereas the battery box can be further away. Second, the battery charger in your RV may not be capable of charging your house batteries fast enough to support the voltage draw when using your Boogey Lights® (in which case your Boogey Lights® will dim quickly). This is more commonly the case in low to mid-range RVs/trailers that typically have a Single-Stage battery charger vs. a Multi-Stage charger. A Single-Stage charger slowly charges the battery at 10 or 12 amps which can take hours to recharge the battery to the point at which it is capable of powering your lights. Tapping into an existing 12vdc circuit will usually solve this issue by using the RV's power converter. This converter, installed in most every RV, takes 120vac current coming from shore-power (or generator) and converts it to 12vdc for use in powering the RVs 12vdc appliances and fixtures. One caveat - this solution assumes the power converter in your RV is large enough to handle the additional load introduced by adding your Boogey Lights onto the system. In some situations the power converter may not be sufficiently sized to handle the additional draw.

If you are going to tap into an existing 12vdc circuit it is important to make sure you have properly identified the type of power you are tying into (AC or DC) AND the polarity of the wires (positive or negative). Also, make sure the circuit you're tying into (both the wiring and the circuit-breaker itself) is capable of handling the additional amperage (see Amperage Chart). Most modern RVs, trailers, motorhomes, fifth-wheels and campers have a mixture of 110vac and 12vdc wiring installed. ALL Boogey Lights® products are 12vdc. If you connect a Boogey Lights® controller or LED strip to 110vac instead of 12vdc, it will absolutely damage the controller and LED strip beyond repair. Similarly, if you reverse the polarity of the power (e.g. connecting 12vdc+ to the negative side of the controller), it will also damage the controller beyond repair. In a typical 110vac environment the BLACK wire is the positive (hot) wire and the WHITE wire is the neutral/ground wire. HOWEVER, in a 12vdc environment, the BLACK wire is always 12vdc– (ground/negative) and the RED (or WHITE) wire is always 12vdc+ (hot). All Boogey Lights® controllers have the power leads clearly marked as to what is 12vdc positive and 12vdc negative. Do not assume the color of the wires will match the controller. We strongly suggest using a volt meter to make sure you are using the proper power and polarity. Wiring the power incorrectly either way will damage your controller beyond repair and invalidate the warranty. Also, overloading the circuit could result in over-heating and potentially cause a fire. If you're uneasy about these electrical issues we strongly suggest having your local RV dealer or qualified electrician do the installation for you.

My RV is 40' long. I want to add under-glow lighting. What do I need?
The maximum length of a single LED strip containing 300 hi-intensity super-bright 5050 12vdc LEDs is about 16 feet (5 meters to be exact). It it not possible to daisy chain more lights without damaging the LED strip itself; too much amperage being pulled through the strip. Attempting to daisy chains LED strips is dangerous (fire hazard) and will absolutely damage your LED strips. For this reason, all LED strips have to run back to the LED Controller. Our base under glow LED light kit contains two 16' LED strips plus the LED controller. These two led strips are designed to be placed in front of the first rear axle, mounted a few inches in from each side. These two strips will illuminate both sides of the RV; at least in front of the first rear axle. Because the LEDs are super bright, two strips is all most folks need. That said, if you want to light up the area behind the axle(s) OR the area in the front of the RV , we offer ADD-ON led strips which can be powered by the same LED controller supplied with the under-glow kit. Each ADD-ON LED light strip has it's own power lead cable which runs back to the LED controller. As long as the total number of LEDs wired to the LED controller doesn't exceed the capacity rating for that LED controller, the system will work properly. Here's a diagram of a motorhome installation. It should give you a better understanding of the layout and placement of the LED strips. The same configuration can be used on most 5th wheel and travel trailers with some adjustments. As you'll see too, some customers also light up the area under their slide-outs. 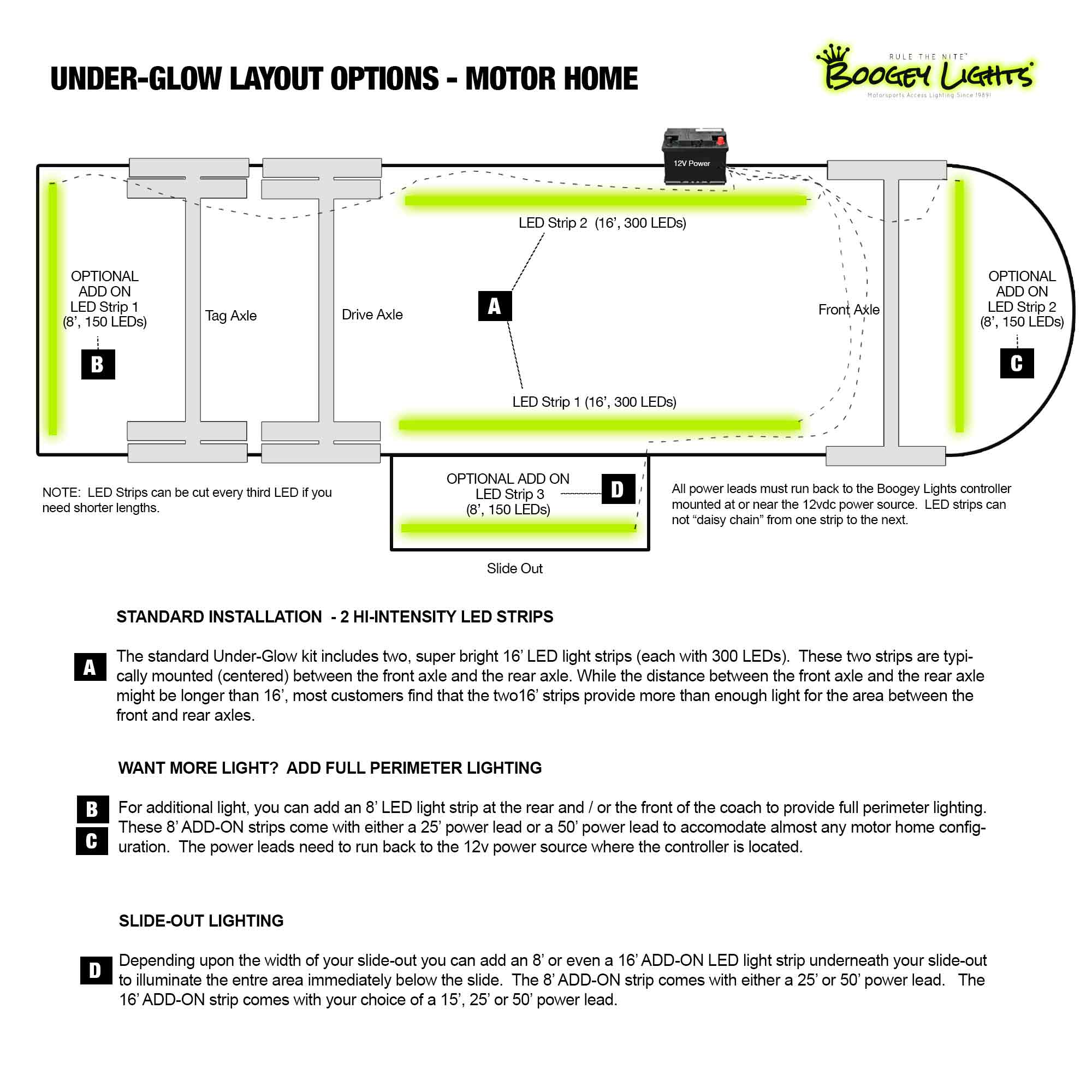 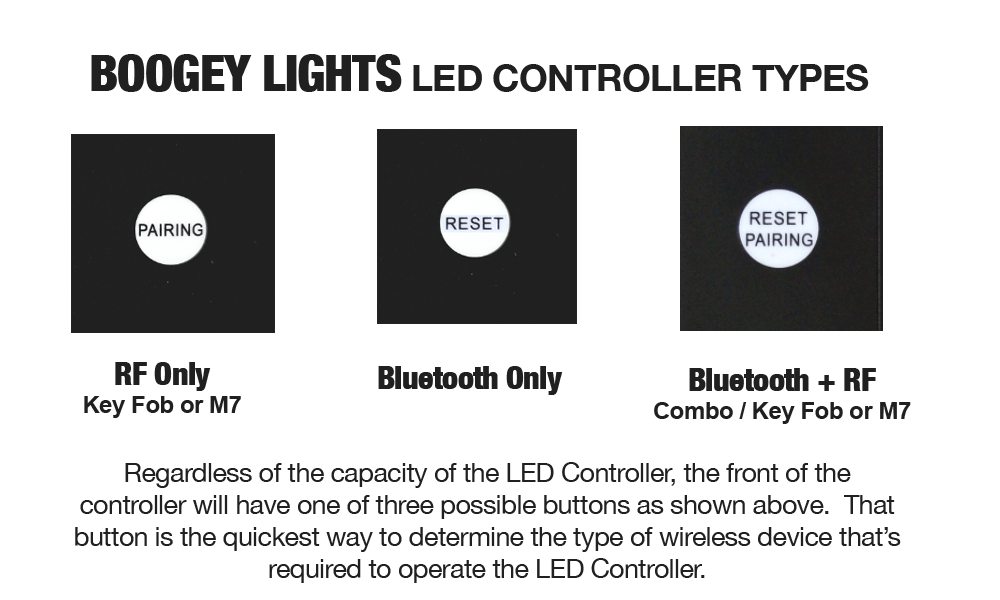 If I purchase the multi-color Awning light, can I set it to just show one color?
YES. Depending upon which controller you purchased with our awning light kit, our multi-color awning light has the capability of displaying from 7 colors (Both the M7 and RF KEY FOB versions) up to 16 million color (Bluetooth version). In both cases you can set whichever color you want to display and leave it there. Also, our controllers provide additional features to include DIMMING, FADING, BLENDING, STROBBING, FLASHING and BREATHING on all color settings.
How can I remove my Boogey Lights LED strip once installed?
We typically use a plastic putty knife and heat gun to remove the LED strip. Heating up the surface makes the strip and the adhesive backing more pliable. The 3M tape adhesive residue can be removed with a solvent and/or rubbing alcohol. Some folks have used products like Goo-Gone too. It's a time consuming process but can be done. Be aware however that removing the light strip isn't possible without damaging the strip itself so it will not be usable once removed.
Can I use Boogey Lights® controllers with other brands of 12vdc LED strips?
The short answer is maybe. It depends on the type of LEDs you're trying to power. In the 12vdc LED lighting world there are two types of LEDs: Common Cathode and Common Anode. The most common and cheapest LED lights made today are COMMON ANODE which are widespread in Asia. A Common Anode LED strip share a common POSITIVE lead and the negative side of the circuit is switched. For these lights the positive side of the circuit is always energized. This is NOT however the typical circuit design in the UNITED STATES particularly for 12vdc. In the United States, the typical 12vdc circuit shares a common NEGATIVE lead and the positive side of the circuit is switched. Think of your car battery. The negative side of the battery goes to ground (the car chassis) and that ground is common (shared) with all 12vdc devices in the vehicle (radio, lights, nav system, horn, etc). The positive side of the circuit is only energized when your car is in use. When the car is off, the circuit is not energized. This is how BOOGEY LIGHTS® controllers and LEDs are built. Why? Lots of reasons but briefly it's a safer design (think "UL" approved), it's more robust in terms durability and allows full 12v power to be applied directly to each LED instead of being shared amongst all LEDs (making them the brightest they can be). Of course it's also more expensive to build a controller that switches the positive side of the circuit which is why most every LED strip being sold today in the RV and motorsports space tends to be Common Anode. So before you try to hook-up a Boogey Lights® controller to any other brand of LED, make sure that LED is a COMMON CATHODE LED strip.
Where can I find LUMENS data for your lighting solutions?
Lumens data is not available for BOOGEY LIGHTS® products. Why? Because frankly it's a marketing gimmick. Simply put, lumen output is a poor measure of the suitability of the type of LED lighting solutions we offer. If we were offering a single color, single bulb to replace a typical 60 watt incandescent bulb used in a lamp for your living room it would be a different matter. The reality however is that our LED lighting products are made up of many LEDs, sometimes hundreds - not a single bulb. And most of our LED lighting solutions have many color combinations, up to 16 million different color combinations in some cases. The Lumens measurement changes dramatically based on the temperature of the color which is measured in Kelvins. In our view anyone attempting to compare motorsports LEDs based on an artificial Lumens value is wasting their time. If you're concerned about the brightness of any BOOGEY LIGHTS® lighting solutions we suggest bench testing them against whatever other brand you want to compare. We're confident you'll be pleased. If however you're not, we cheerfully accept returns up to 30 days.
My friend has BOOGEY LIGHTS® RV awning lights too. We often camp together. Will the frequencies of our remote controls be different so we do not operate or interfere with each others awning lights?
Not to worry. BOOGEY LIGHTS® RF controllers are paired with the remote control so only a remote that is specifically paired with the controller will operate that controller. Bluetooth devices operate similarly.
Where can I find AMPERAGE data for BOOGEY LIGHTS® products?
You can find amperage data on Boogey Lights® products here at this link.