Many travel trailers and fifth wheels today include LED lighting on the end cap of the trailer; usually facing forward. These lights are often the first lights to fail in new trailers mainly because they're facing forward and subject to wind/rain damage. Boogey Lights hi-intensity surface mounted LED light strips are built tougher. They're also brighter. Our impressively bright surface mounted hi-intensity LED flexible strips are ideal for End Cap LED Light replacements found on many travel trailers today. We offer them in a variety of single color options which in most cases can be a direct replacement for factory installed lights using existing wiring. Simply remove the existing LED strip and replace it with a Boogey Lights LED strip. If you want to upgrade to a multi-color RGB light strip, we offer that option too although it does require the purchase of an LED controller. Also, the installation is more complex since it requires the installation of the LED controller into the circuit which usually requires cutting at least one access panel hole in the inside wall facing the end cap. It's usually the only way to gain access to the area behind the end cap.

Built with two ounce copper PCB, the brightest 5050 LEDs available and 1.2mm of genuine 3M® VHB double sided tape, these LED strips are super easy to install yet made tough for motor sports applications. They're available on either white or black PCB in varying lengths ranging from 3 LEDs (about 2 inches long) to 300 LEDs (16' long). The single color default configuration has a 12", two conductor (red + black) power lead hard wired to the end of the strip. This power lead connects to the existing end cap lighting circuit. The multi-color default configuration has a 10', four conductor power lead. The LED strips can be cut every 3 LEDs. If you want longer power leads, we offer additional power lead length options. This product is not vehicle specific.  It can be used on all types of campers in all types of configurations.  Many campers only have one end cap light.  Some have two.  Some have three.  Some have four.  As such, this product is sold PER ONE SINGLE LED STRIP. The price listed is for one single LED strip. If your RV has two end cap lights both the same length and you wish to replace both of them, you'll need to order TWO of this product.

Note:  This product is designed and intended to be used to replace existing factory installed end cap led lights that have the wiring in place (single color usually) as well as a location to mount the LED strip on the end cap.  In most factory installed end cap lights there's an indentation or similar molded crease or structure the LED light strip fits or sits in and/or follows. It's part of the end cap design and helps protect the strip from side shear wind / weather forces beating against it while the trailer moves down the road. If your trailer doesn't have end cap lights currently installed, we do not recommend trying to retro-fit your trailer with these end cap lights.

A Boogey Lights® RGB controller is required to power the multi-color LED strips listed on this product; it's however optional for Single Color LEDs. While single color LEDs can simply be hardwired into an existing SPST OEM switch on a 12vdc circuit (replacing the existing LEDs that came from the factory), adding the optional wireless controller allows you to turn the lights on/off remotely via the included RF wireless remote or your Bluetooth enabled smartphone (and our free APP). The controller also gives you the ability to easily dim the lights (7 levels) as well as set presets. The four LED wireless controllers offered for this product configuration are all RF + Bluetooth enabled LED controllers. The main differences are the LED capacity (300, 900 or 1800) and the type of wireless remote (compact Key FOB or larger format M7 tv style remote). In addition, we also offer wired push-button controller options if that's of interest. Important Installation Note: If you're adding an LED controller of any kind to the installation, you will likely need to install at least one access panel in the wall facing the end cap to gain access to the area behind the end cap.

We offer the option of SMOKE TINTED COATING for our Black Multi-Color PCB LED strips instead of the standard clear coating on our END CAP LED Light kits. The smoke tinted LED strip (see photo above) has a nicer daylight look when mounted in plain sight. Some customers prefer this look on their RVs as it blends better particularly with darker color paint schemes. This is a cosmetic option only for LED strips that are mounted where they can be seen in the daylight. It is important to note that this smoke tinted coating does reduce the brightness of the LEDs by about 20%. Boogey Lights LED strips are already incredibly bright so most folks don't mind the reduction in brightness but it is something to be aware of. If you want the absolute brightest END CAP LIGHT strip, go with the default clear coat selection. If you want the LED strip to blend in better with your RV's paint scheme during the daytime (and the installation to look a little more finished) and you're OK with a little less light, the tinted coating might be better.

You'll need to take a measurement of the LED strip you wish to replace. They're typically 24" to 36". Measure the existing LED strip on the RV now. In some cases you might be able to go a little longer. Each LED strip will need to be mounted to a smooth, mostly straight continuous surface. When taking that measurement be sure to allocate 1 to 2 inches from the end of the LED strip for the power lead wire coming off the LED strip. You can look at the close-up daylight photo of a Boogey Lights LED strip on this product page mounted on the end cap of a Grand Design travel trailer to see what we're referring to. Since the single color LED strip is replacing the existing strip on the RV now, the default 12" power lead is more than enough.

You'll need two measurements for each LED strip you wish to replace: 1) the length of each LED strip, 2) the length of the power lead you want attached to the LED strip. The default configuration for the power leads in multi-color is 10' which should work for more installations but we offer the ability to increase that length if needed. Each LED strip will need to be mounted to a smooth, mostly straight continuous surface. The power lead needs to be long enough to reach the LED controller which for multi-color installs is typically inside the end cap area or near that area where 12vdc power is avaialble.

Once you have these measurements, you can place your order. For each LED strip and power lead combination you'll need to add one End Cap LED light strip product to your cart with those specifications. If you have any questions, give us a call and one of our product specialists can assist you with this process. Make sure you have some 3M Adhesion Primer, since it is NOT included with this strip.

Includes
ONE (1) 12vdc Hi-Intensity Surface Mounted LED strip in your choice of LED color (single color or RGB), length and PCB color. The price listed is for ONE END CAP LED LIGHT STRIP.
Each strip includes 12" power lead (single color) or 10' power lead (multi-color) hardwired to one end of the strip. As an option, you can configure the strip to have longer power leads.
Three Year Original Owner Warranty
Heat shrink tubing to seal the new power leads to the existing wiring. NOTE: Requires a heat gun or hair dryer.
Optional Wireless RF + Bluetooth Remote Control


Understanding LED Color Temperature
IMPORTANT NOTE: To achieve the full adhesive strength of the 3M® tape affixed to the back of each strip 3M® Adhesion Promoter (aka Primer) must be applied to the mounting surface first. This is an important step to ensure a secure bond. The 3M® Adhesion Promoter creates a chemical bond between the tape and the mounting surface such that the LED strip will stay stuck (at least until you decide you want to remove it). Using any other solvent such as rubbing alcohol or acetone is not the same thing as using 3M® Adhesion Promoter. While these solvents will help clean the surface, they do not prime the surface. There is a difference.

3M® Adhesion Promoter is NOT included with this single strip.  A promoter bottle can be purchased separately on our website in two or four ounce bottles.

The LEDs are completely sealed against the elements. They are heat resistant, waterproof and easily cleaned for maintenance free operation. The soft, gel-like strips provide maximum flexibility and a clean and sleek appearance. Their low profile design makes them virtually invisible when placed on the bottom of your tank and their wide viewing angle floods your bike with light. For information on installing our light strips including where to cut the strips if needed, please see our Installation Instructions Page.

Note: It's simply not possible to provide detailed instructions for all installation scenarios. This information is intended to be used as a guide. You may need to vary your installation based on your RV configuration.

The vast majority of END CAP LED light installs are single color.   This is because every factory installed End Cap LED light strip we know of is single color.  Replacing a single color LED light strip using the existing factory installed wiring and wall switch is by far the easiest to do.  Typical single color installation time is 1.5 to 2 hours to do both End Cap LED strips.   Multi-color LED strip install is more complicated because you need to install an LED controller between the LED strip and the 12vdc power source.  Doing so almost always requires that you install at least one (sometimes two) access panel holes in the interior wall just behind the End Cap.  This allows access to the back side of the End Cap where you can run the extra wires needed for multi-color LED (4 instead of 2) and then route those wires  down to the battery box or storage area where you can mount the LED controller and connect it to 12vdc power.     Typical multi-color LED strip install is 5 to 6 hours.

SINGLE COLOR INSTALLATION PROCESS (Photos are provided at the bottom of page.) 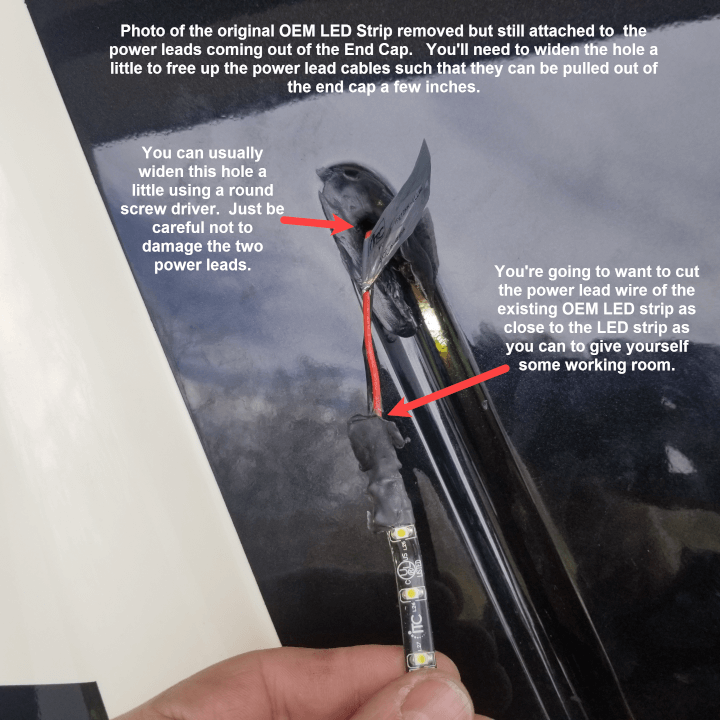 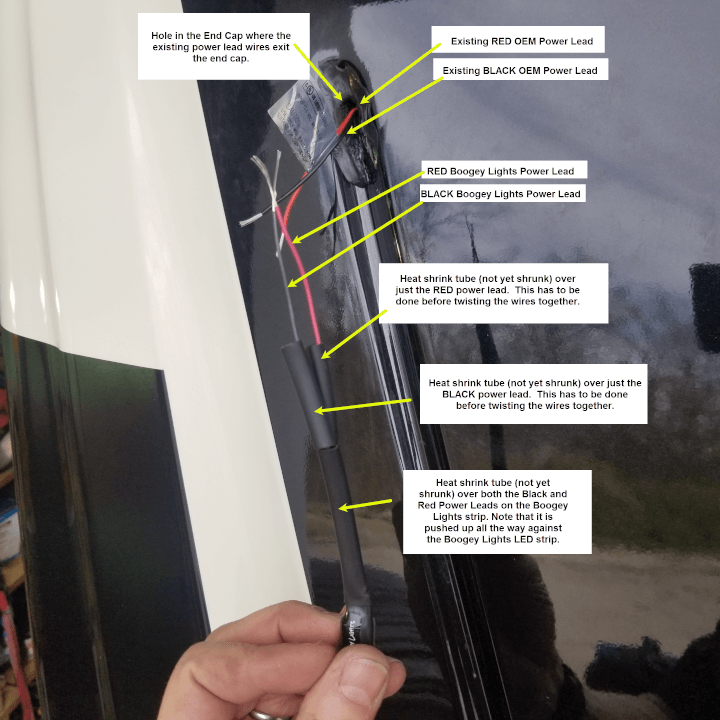 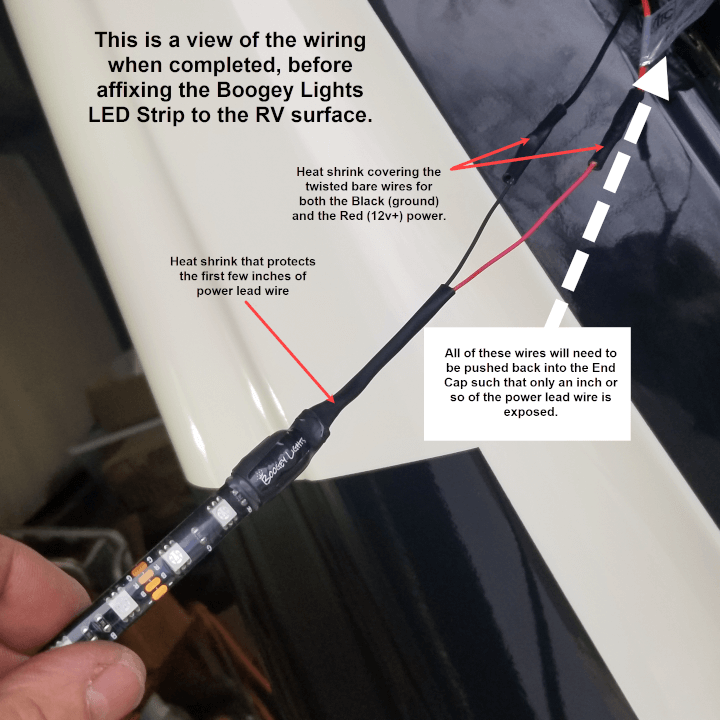 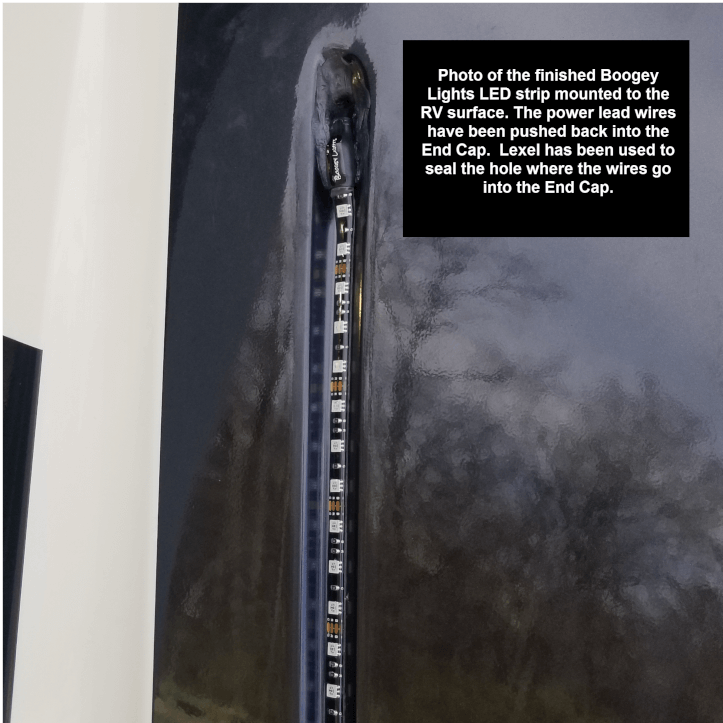