The multi-color RGB version provides over 16 million color combinations that you control and includes it's own on/off wireless switch. The multi-color RGB kit includes our HEAVY DUTY Combo Bluetooth + RF M7 controller so you can control the lights with your Bluetooth enabled smartphone or the included wireless RF remote control. With any of the Boogey Lights® BLUETOOTH controllers you can control your lights with your Bluetooth 4.0 enabled Android or IOS smartphone. These high-tech controllers are capable of displaying 16 million different color combinations. In addition, lighting effects on the Smartphone controller are significantly more controllable in terms of speed and intensity. Each color and lighting effect is controlled by "sliders" or a color square on your smartphone screen so you can adjust the speed and intensity to get the lighting exactly the way you want it. Our controllers operate on 12vdc. Also, all of our SERIES 2 Bluetooth Combo controllers include an RF remote control allowing for quick on/off of the controller. You can operate this controller with the included RF wireless remote OR you can use your Bluetooth 4.0 enabled smartphone and our free smartphone APP (Android and IOS).

More About the Boogey Lights® Bluetooth Smartphone APP
Includes
Under-Glow LED light kit with 705 LEDs consisting of 13 different Heavy Duty LED light strips with power leads. Mounting and suggested placement diagram included.
Five piece of aluminum flat bar used (the longest of which is 84") for mounting the Heavy Duty LED strips to the truck's sub-structure.
RGB/Multi-Color: Wireless RF + Bluetooth Combo RGB Heavy Duty LED controller with M7 Style wireless remote. This is a single zone LED controller required to operated multi-color RGB leds. For those wishing to add our other Cascadia light kits to their truck, we also offer a DUAL ZONE Heavy Duty LED controller which provides the ability to segment your lights into two distinct zones if desired.
Single Color: Single color LEDs do not require an LED controller to operate. They do however require a switch somewhere in the circuit to turn them off/on. There are a number of ways to do this but regardless of how you decide to switch your single color LEDs, you need to be mindful of the amperage that 705 LEDs will draw. If you're considering adding these LEDs to an existing circuit (e.g. with your existing marker or running lights) we strongly suggest using a relay vs simply tapping into the existing circuit. This especially important on newer trucks where the LCM will likely throw an error when you add 705 more LEDs to the system.
Installation supplies includes wiring kit, feeder cable, 3M Adhesion Primer, 5 pieces of aluminum flat stock, 3M quick-lock, split wire loom.
Installation Manual and Wiring Diagram
Original owner 3 year warranty PROVIDED the installation of the LED strips in this kit are done according to Boogey Lights installation instructions. Failure to mount these LED strips according to the instructions voids the warranty.
Return Policy Exception Notice. This kit subject to a 35% restocking fee due to the amount of time associated with producing this kit, shipping costs and the custom nature. See return policy for complete details.

Installation of this led light kit takes about 6 hours to do properly. You can download the Installation Manual directly from our website to get an idea of what's involved.

There are 13 different mounting locations in this kit and all of the power leads need to be carefully run. The mounting areas are focused in the following areas: Under the front bumper, driver's said under-structurere, passenger's side under-structure, driver's side rear frame rail and passenger's side rear frame rail. While you do not necessarily need to remove the side skirts, you do need access under the truck. DIYers will find it easier to access the under side of the truck if at least one side skirt is removed. If you're installing an LED controller with this kit, you'll need to remove the driver's side steps to access the batteries. Also, the LED controller is mounted in the driver's side storage / jockey box. You will need to drill a hole in the floor of that box to connect power to the battery box, led wires and antenna. All of the our Heavy Duty LED strips include a 3' power lead. Most of the strips will need to have additional power lead cable added which we include in the kit. We recommend connecting all of LED strips under the front bumper together and then running one feeder cable back to the LED controller. You can the same for many of the other strips in this kit based on their mounting location. Doing so reduces the total number of power leads coming back to the LED controller. Regardless, we strongly recommend planning out your install on paper first. Our installation manual includes more detail on all of this including photos of the suggested mounting locations for each strip. We do not however include detailed instructions on how to remove the side skirts/steps. We assume anyone attempting to install this light kit has the knowledge to do this already (or, is willing to figure it out on their own using any number of online sources).

These are the LED placement locations we used for this kit. It's important to follow this placement pattern to ensure the LED strips are protected. Mounting them in any other way voids warranty.

Under Front Bumper: We mount two 45 LED heavy duty light strips under the front bumper in a 'V' shape. The power leads come together in the middle.

Passenger's Side Under-Structure: To build out the mounting structure for the LED strips we mount two pieces of aluminum flat bar (each are 72" long) to the truck's under-structure. Then, we mount a total of THREE heavy duty led strips to that aluminum flat bar: 2 - 75 LED strips and 1 - 30 LED strip.

Rear Frame Rails: We mount two 75 LED heavy duty strips to the rear frame rails just behind the cab and in front of the drive axel. Both shining downward. 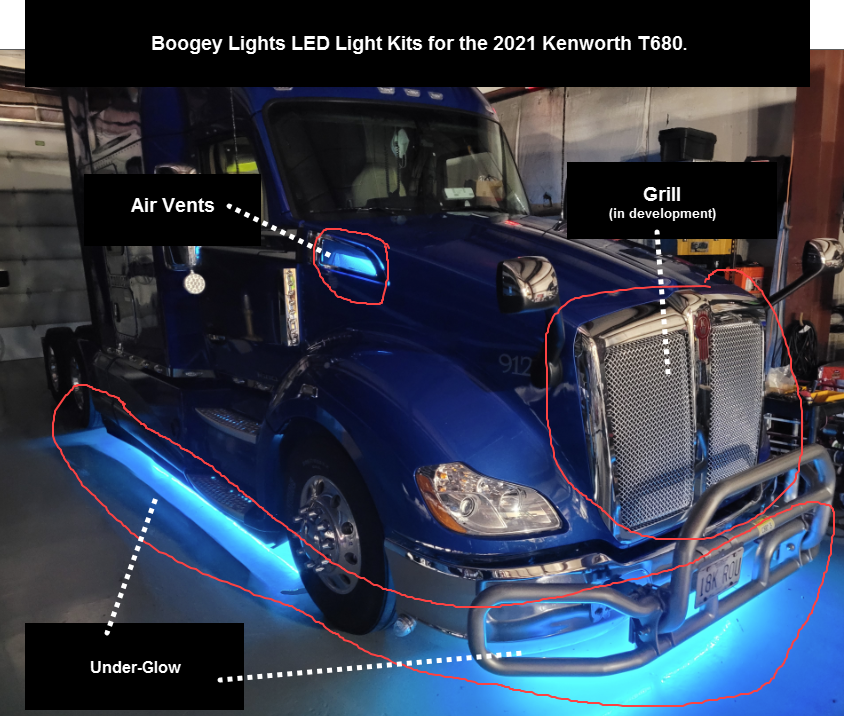 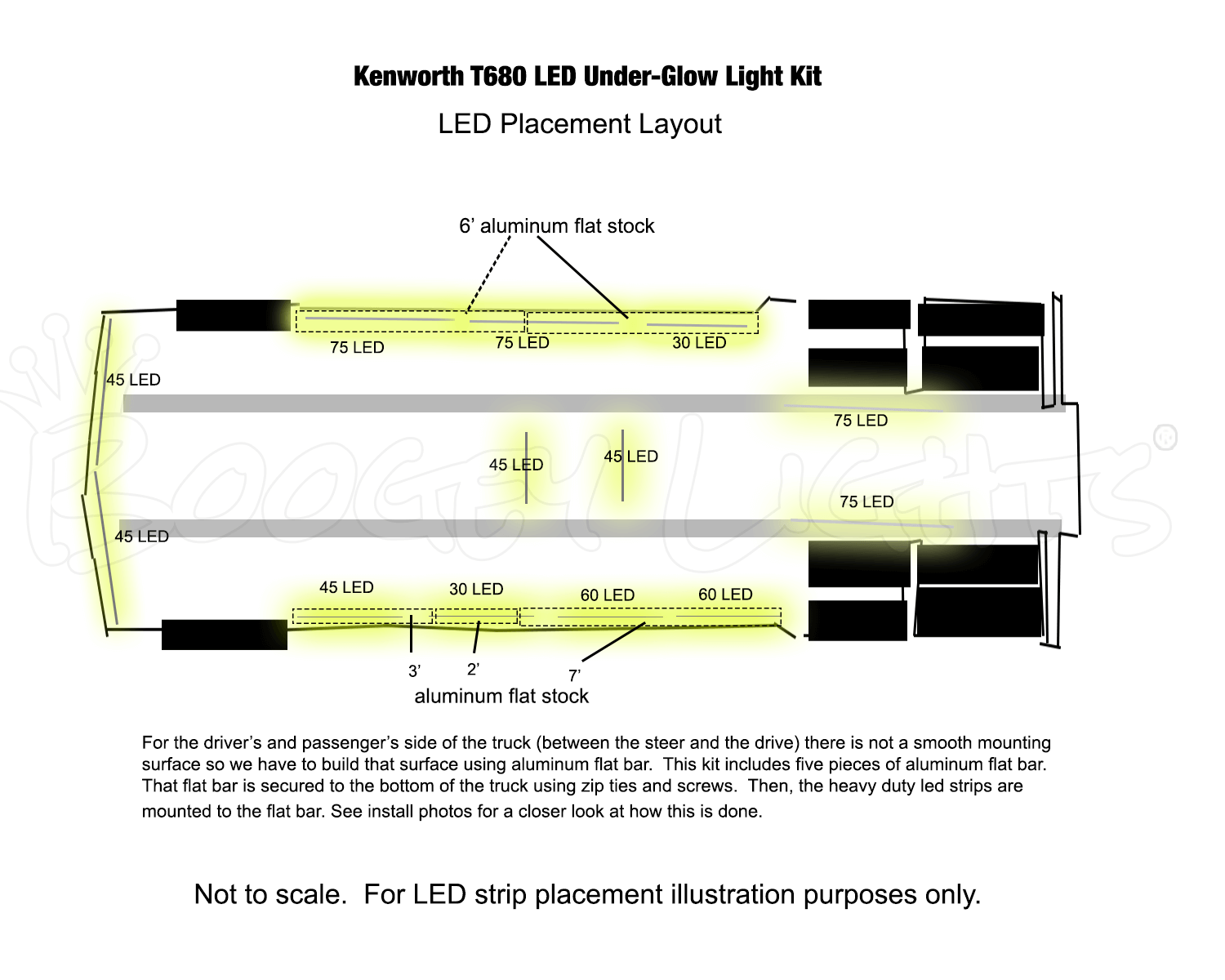 Here are some photos from our Installation Manual. 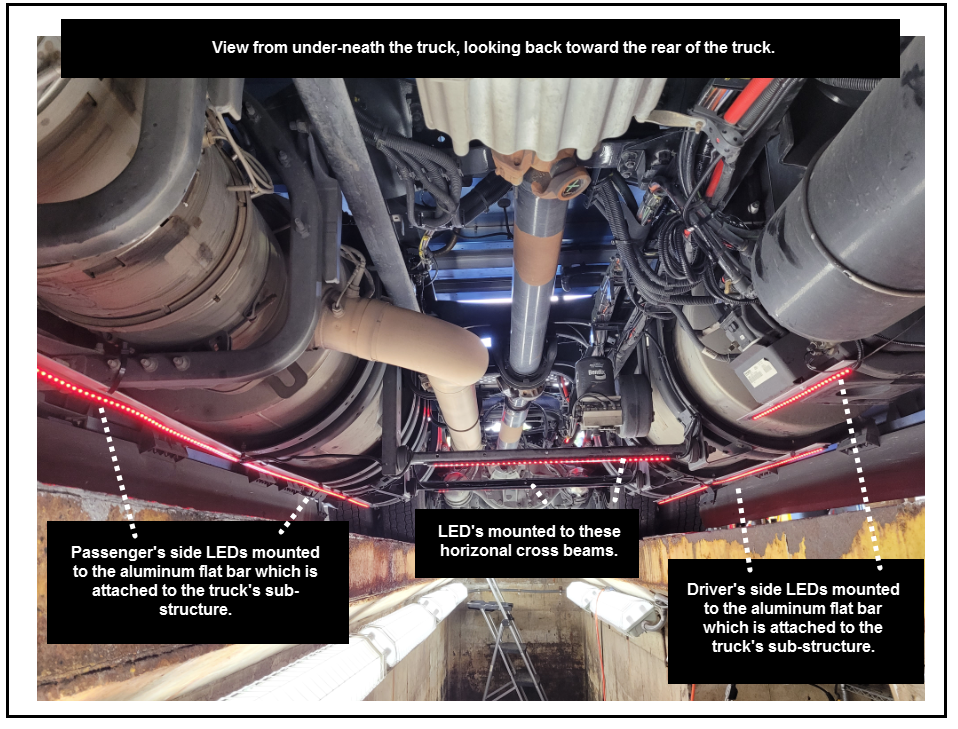 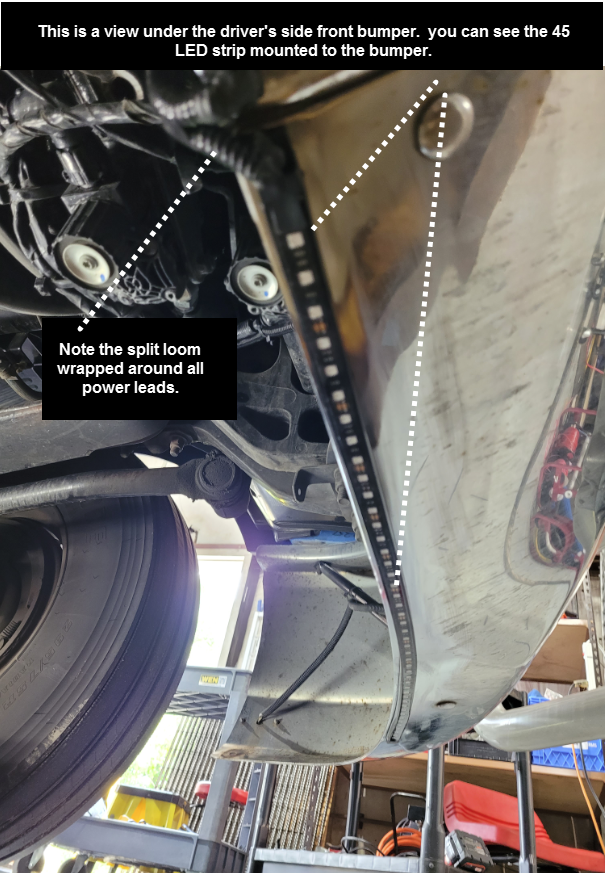 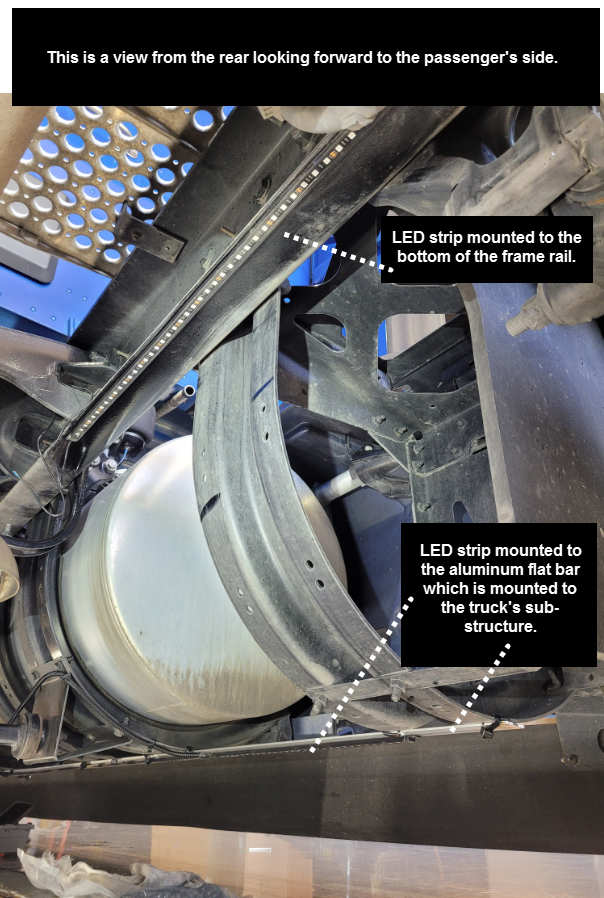 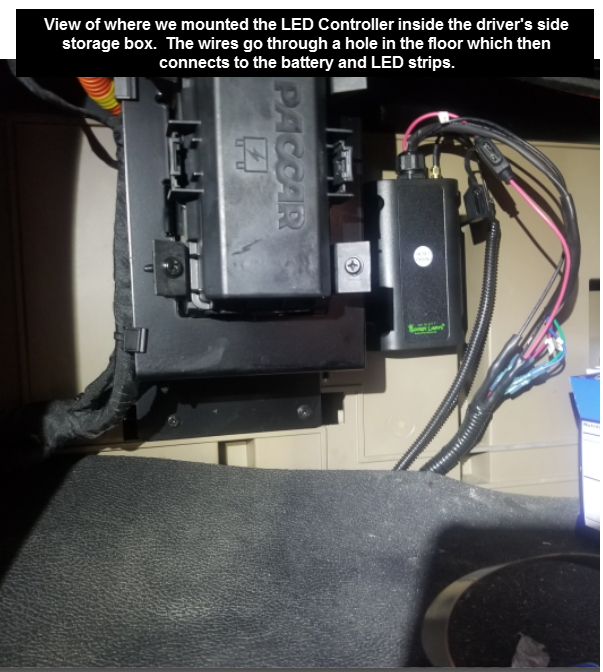 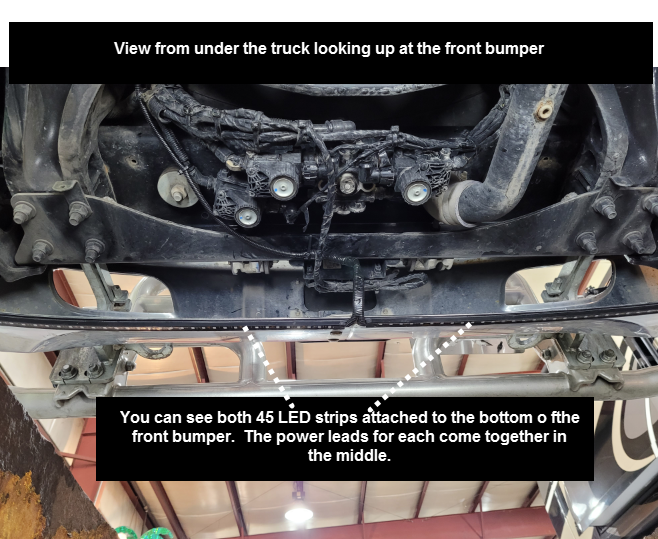 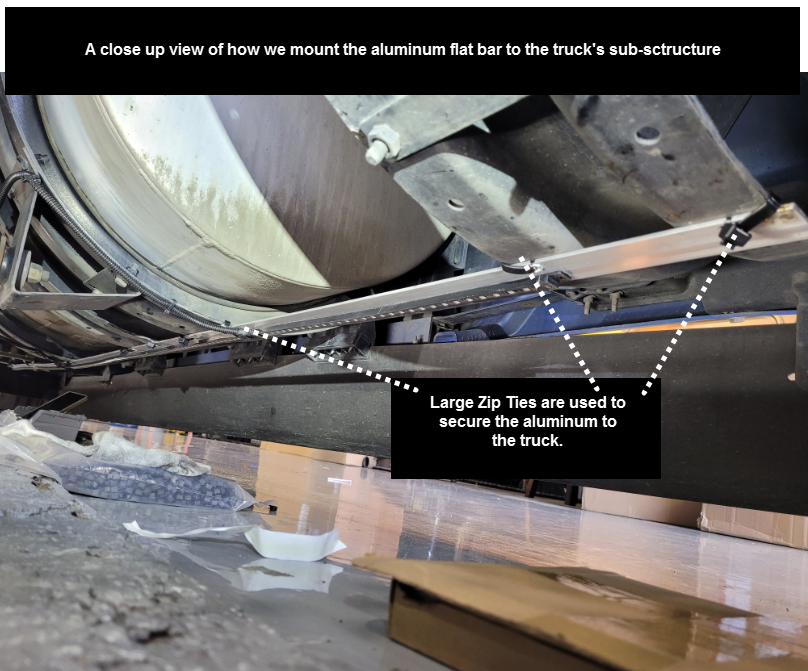 Note on color selection: Amber (and Red if facing toward the rear) are the only colors that can be used while driving. If you're buying RGB lights, the Bluetooth controller allows you to setup presets for your color selections as well as features which include dimming, strobing, breathing and color blending. In our demo truck we have one button pre-programmed for orange/amber which we also dim by 50% so it isn't so bright. Be aware however you cannot get a true ORANGE or AMBER with RGB leds. WHY NOT?. You can come close by mixing equal parts RED + GREEN (and then increasing the intensity of the red just a little) using your phone and our Bluetooth APP but it is not precise. More details about this can be found here.

The Boogey Lights® Bluetooth controller included with this light kit also has our new SERIES 2 firmware which gives you the ability to program the controller to display two or three colors of your choice and then rotate those colors in sequence. For example, let's say it's Fourth of July and you want your lights to rotate through the color sequence of RED, WHITE and BLUE . Or, perhaps your favorite sports team's colors are Red and White and you want your lights to continually rotate through a color sequence of RED and WHITE. This SERIES 2 firmware controller and smartphone APP will do that - and more. You can for instance vary the speed of the sequence as well as the brightness. You can also choose from one of two different sequencing effect modes: BREATHING or ROLLING. Additionally, you can save these configurations in up to 3 presets such that you're able to recall the lighting configuration with a press of a button.