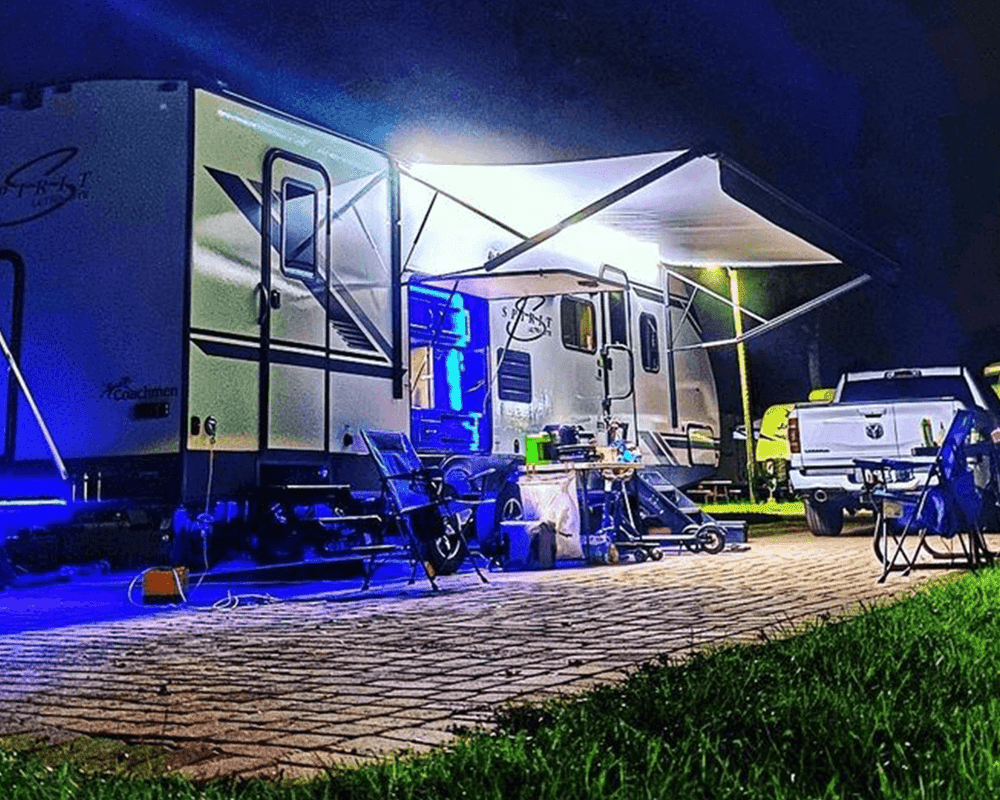 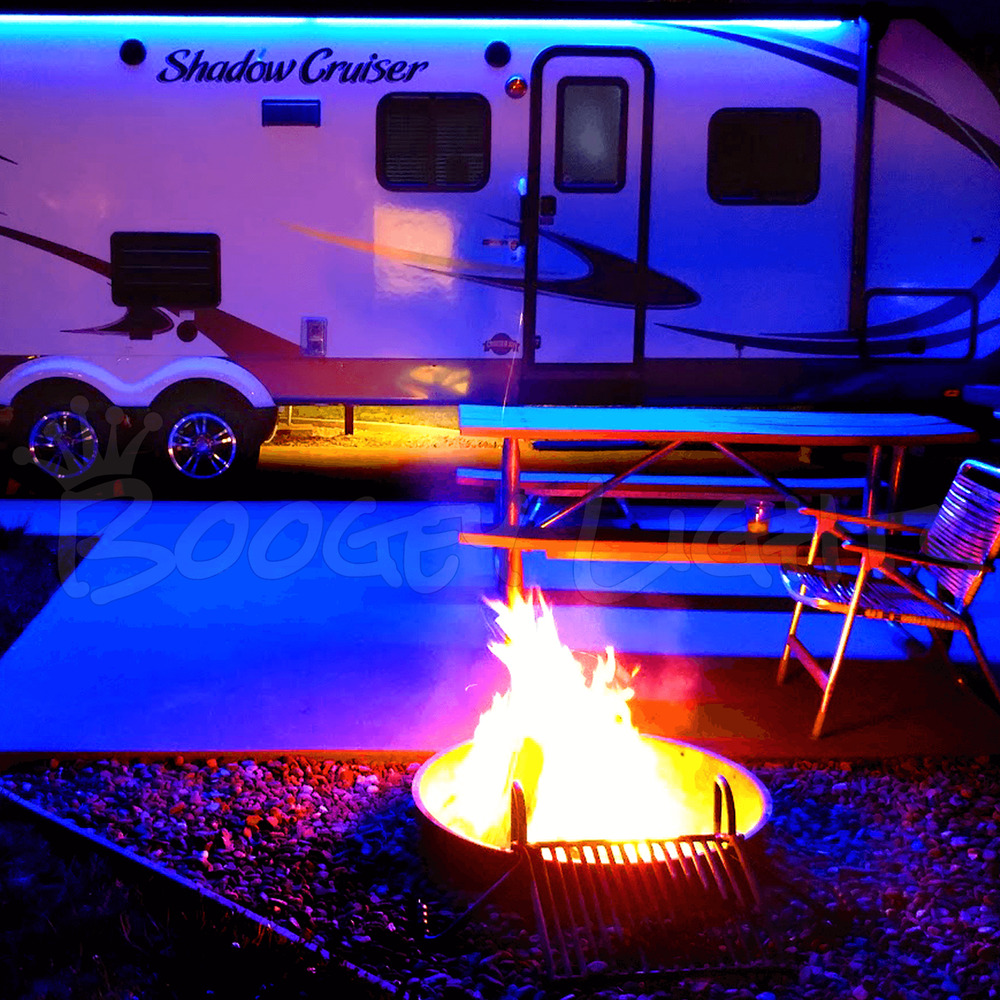 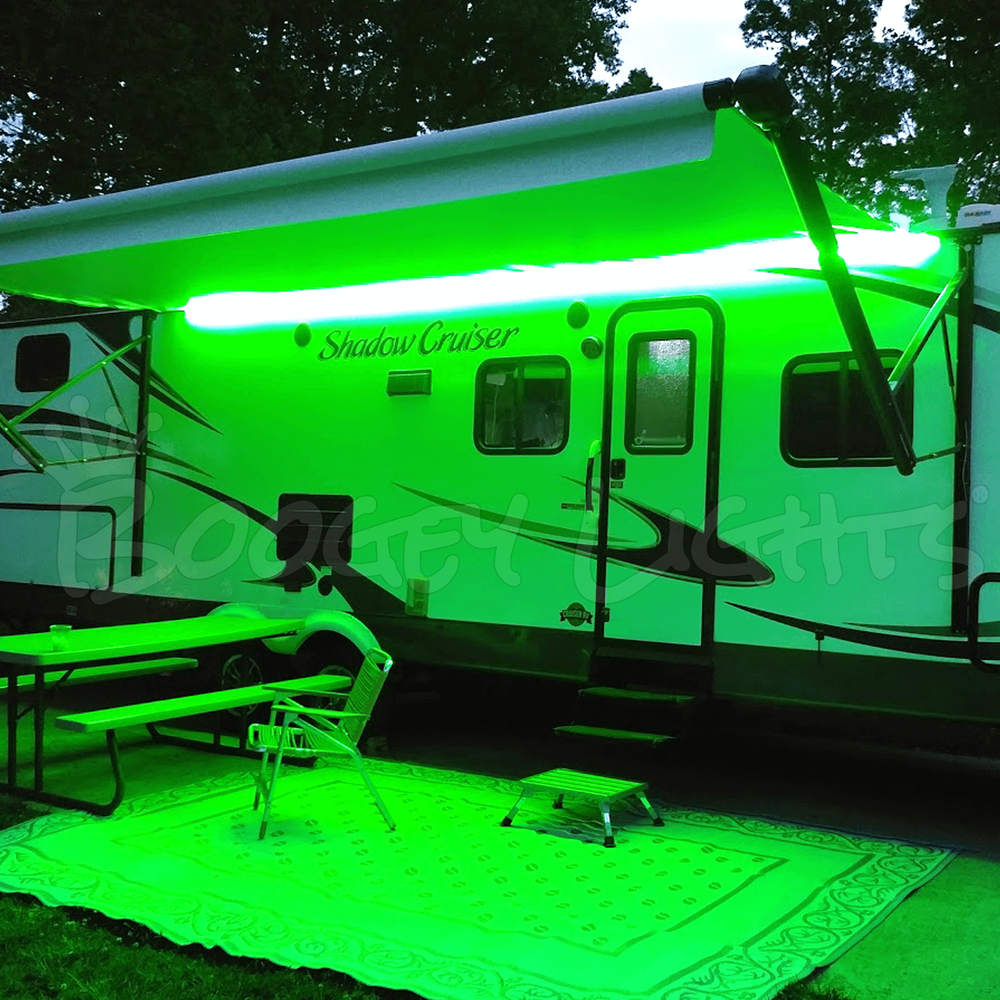 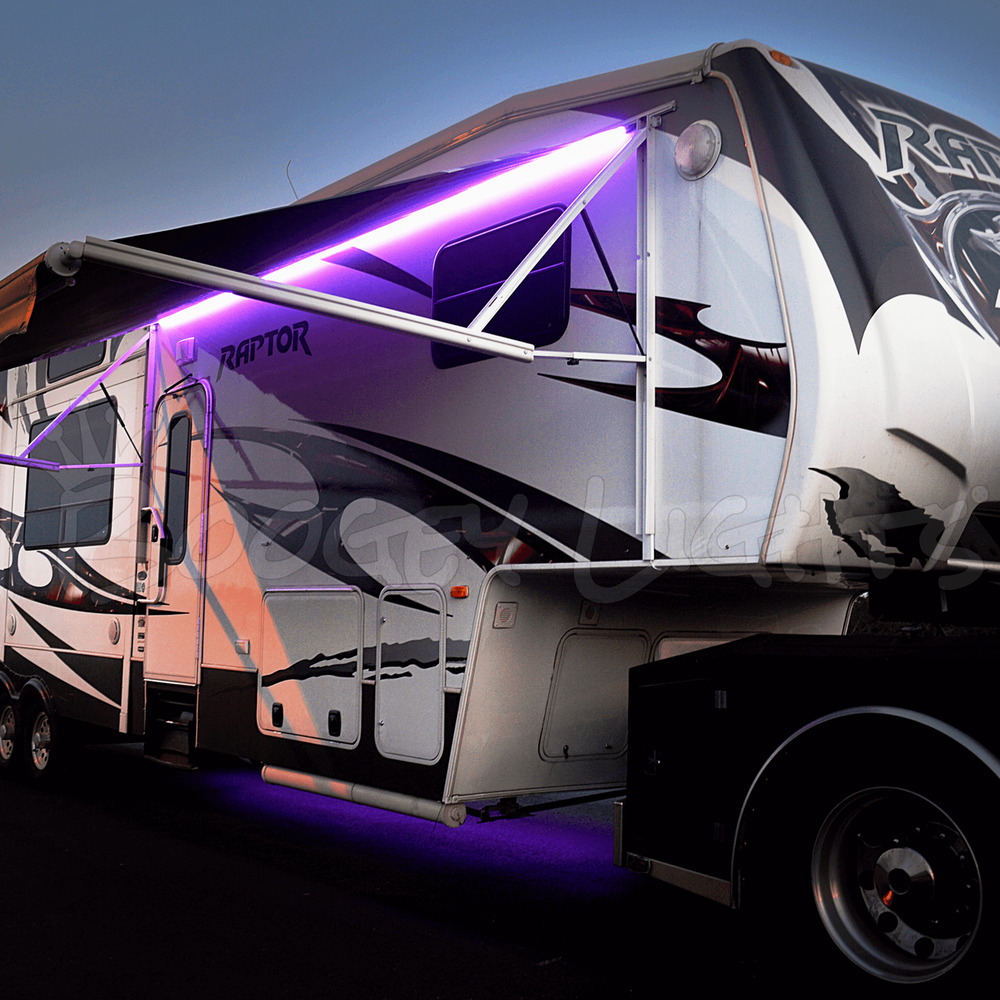 The Boogey Lights® Single Color LED awning light kit is designed to attach to the side of an RV, trailer or camper just beneath the awning. Each LED strip is 16 feet long and can be cut if needed to fit your application. Width is 3/8" (10mm). Height is 1/8" (3mm). On full power it provides an incredible amount of light.  If purchased with the optional LED Remote Control, you can control the light with your choice of either the wireless M7 or KEY FOB hand held RF remote or your smartphone Bluetooth device with our free Android or IOS APP. Awning Light Kit is available in these color options: WHITE, RED, GREEN, BLUE, PINK, ORANGE and PURPLE. With the optional LED Remote Control, the lighting effects include four levels of dimming, strobing, fading and "breathing" using the included wireless RF controller . Operates on 12vdc. Optional 110vac to 12vdc power converter is avaialble.

NOTE: The above photos show our optional UNDER-GLOW LED kit which is affixed to the bottom of the RV shining down on the ground.

Why Does The Printed Circuit Board (PCB) Color Matter?

PLEASE NOTE: The environmentally safe Polyurethane coating used to seal our LED strips will tend to have a yellowish tint over time. It will be more noticeable on LEDs mounted on white PCB vs black PCB. This yellowing does not impact the brightness or functionality of the LEDs. Also, strips that are exposed to UV sunlight won't tend to exhibit the yellowish tint as much as those that are used indoors.

Important Note On Purple LEDs! All purple LED’s on the market today are actually ultra-violet (U/V) and produce a soft purple glow particularly when used on motorcycle engines. The color however is not a real bright effect like you’ll get with red, blue, green, orange, etc. If you want a subtle purple glow that looks great, then the U/V LED’s may well be for you. If however you want the brightest lights possible, you will not be happy with purple.

Whats Included:
1 - Single-color LED light strip in your choice of color with 300 super bright LEDs on your choice of black or white PCB (printed circuit board). Total length is 5 meters (about 16 feet) and can be cut every 3 LEDs if so desired. Each strip has authentic 3M super-strong backing tape affixed to the back of the strip. Each LED strip has 15' of additional power lead cable. Additional power lead cable can be purchased if needed.
OPTIONAL: Multi-Function Wireless RF Remote Control.
3M Adhesion primer (.5 fluid ounces) used in preparing the surface of your RV before affixing the LED strip.
Wiring kit and connectors
Installation Manual
3 Year Original Owner Limited  Warranty

There are a number of options available which you may wish to consider. If you have a question as to what you need, call us! We're here to help.

Boogey Lights® single color LED light strips can be a direct replacement for many factory installed LED awning lights. There are however some things to consider based on personal preference.

PROS: Faster, easier to install. As close to plug-n-play as you'll find short of ordering the exact same LED light that came with your RV from the factory (if available).
CONS: The light cannot be dimmed. It's either on or off. There are no wireless remote control capabilities.

If you wish to use the wireless remote control (there are distinct advantages to doing so) you can still use the Boogey Lights® LED strip as a direct replacement however you'll need to find a location to mount the LED control box where it will be protected from the elements. In this scenario the controller power (12vdc) is connected to the existing awning light power lead coming from the inside wall switch. The LED controller is inline between the wall switch power and the LED light strip. When the wall switch is on, 12vdc power is provided to the LED controller. At that point you can use the wireless RF remote control to operate the awning light (on/off, dimming, flashing and speed control). Of course anytime you turn off the wall switch power, doing so will also turn off the awning light.

PROS: The light can be remote controlled using the included RF wireless remote which offers dimming, flashing, speed control and on/off capabilities.
CONS: Takes longer to install because the LED controller needs to be mounted in the circuit. Not all installation scenarios will have room for the LED controller to be conveniently mounted.

Mounting On The Awning Roller

Boogey Lights® LED strips are designed to be mounted immediately underneath the awning, affixed to the side of the RV or on the awning housing which is attached to the side of the RV. Some older awning styles have the LED strip mounted at the end of the awning on the awning roller. We do not recommend using Boogey Lights® for this type of installation as doing so will create a power lead fail-point as they roll and unroll for each use. The copper wire will eventually break and/or the stress placed at the point where the power lead attaches to the LED strip will force a failure of the LED strip. Mounting the LED light strip directly on the awning roller also means the light can only be used when the awning is fully extended. While we know some customers have used Boogey Lights® this way, our warranty does not cover this type of installation.

NOTE: All Boogey Lights® LED strips are COMMON CATHODE LEDS. They share a common ground and will only work with positively switched controllers. Most LED strips on the market today are COMMON ANODE because the controller technology used to power them is less expensive to manufacture. However they're not nearly as bright and are an overall inferrior design when compared with COMMON CATHODE LEDs.